Enquire Online Request a call back 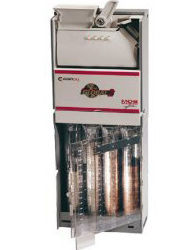 No, it has been superseded by the Guardian 6000 XL Coin Changer. The Global 2 units have run out and no more will be available.

How do I send my faulty coin mech in for service and what will it cost?

Faulty coin mechs can be sent to us for service at:  Coin Acceptors  Attn: Workshop, Unit 11 / 1 Cowpasture Place, Wetherill Park NSW 2164. It is recommend  that a registered and/or insured service is used to ensure proof of delivery.

When sending in your coin mechs for service include your company name and contact details (name and phone number). Ensure a street (not postal address) is included in your details as we will return it via TNT couriers. Otherwise, delivery via Australia post may result in delays due to processing time.

Also include a description of the fault, as this will help us complete your repairs sooner and allow us to service the mech in case we find no fault.

The service charge is $75 +GST plus any parts used in the repair. Return freight will also be charged.

Why is the LED on the front of the acceptor flashing?

This indicates that the coin changer is in float mode, to toggle this mode press and release inventory buttons A and D simultaneously followed by buttons B and C simultaneously.

What is the Coin Float Mode?

Paydown float mode will allow the coin tubes to fill to full and later they can be paid down to the set coin levels, therefore maintaining a set change level after a service call.

Level Float mode will cause the coin tubes to fill to the set level after which all additional coins will be routed to the cashbox, therefore maintaining a set change level throughout operation.

To change the float mode type, the coin mech needs to be returned to a service centre, so it can changed via software. This will be done at no cost.

After this, when the coin mech is in the machine, it needs to have coins fed into it so it can have an accurate coin count for each tube. This is done via the TUBE FILL mode in an electronic vending machine or via the coin mech's manual fill mode in electromechanical vending machines. After the coin tubes are filled to the desired level, leave the fill mode, and press buttons A&D together, then B&C together to enter float mode (the LED will flash ON/OFF).

Can I get a replacement for my ALD/Q -F707 electro-mechanical Jones Plug coin mech?

No. The Electro-mechanical Jones Plug coin mech, model numbers ALD-F707 or ALQ-F707, are no longer available.

How do I set the vend price?

If the Vending machine is fitted with its own electronic control board the prices are set through its menu.

Otherwise if the coin mech is either an ALQ-F70X or ALD-F70X and is connected to the vending machine via the black Jones plug, then it is the only price control in the vending machine, the prices are set with the series of switches that are behind the acceptor head, the beige part at the top, there is a latch at the top right corner that allows the acceptor head to folded forward to reveal the switches.

To change the price on a single price coin mech, set the price you want (for example $1.20, with switches 4 & 5 ON) and press the mode button that is to the right of the LED. It will turn off momentarily, then return to a steady on.

To change the price on a four price coin mech, set the price you want (for example $1.20, with switches 4 & 5 ON) and press the mode button that is to the right of the LED. The LED will start to flash, now press the selection on the vending machine you want that price set to. Repeat this process with every selection on the vending machine (to ensure that a price is set for all selections).

What are the posible coin tube configurations for the Quantum coin mech?

The following is a list of the Australian coins, the tube used for the coin and the possible locations in the cassette for that tube.

It is recommended that a 10c tube is included to ensure  change giving ability for all product pricing.

What is the default coin tube configuration for the Quantum coin mech?

Why doesn't the coin mech accept any coins to the cashbox?

How should I clean the product?

Use a damp Cloth to clean surface dirt, any persistant grime can be cleaned off using a gentle cleaner, that will not leave a residue. (we recommend Windex). Ensure the product is dry after cleaning.

When cleaning a Global or Quantum coin changer the following areas are particularly important.